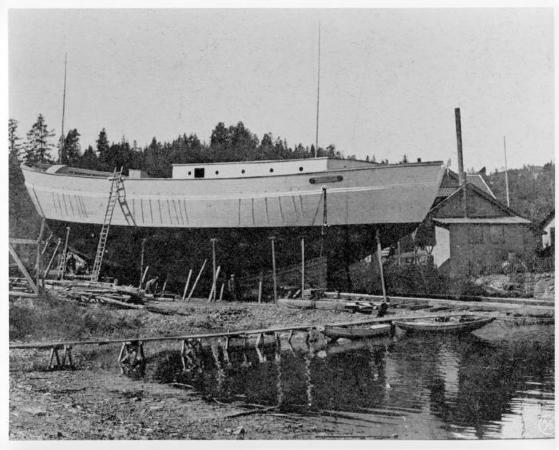 Maud under construction, 1917
Ask An Archivist
Comments and Tags (0)

The Maud, named for Queen Maud of Norway, was a ship built for Roald Amundsen for his second expedition to the Arctic. Designed for his intended voyage through the Northeast Passage, the vessel was specially built at a shipyard in Asker, Norway on the Oslofjord.

After sailing through the Northeast Passage, which did not go as planned and took six years between 1918 and 1924, she ended up in Nome, Alaska and in August 1925 was sold on behalf of Amundsen's creditors in Seattle, Washington.

The buyer was the Hudson's Bay Company which renamed her Baymaud. She was to be used as a supply vessel for Company outposts in Canada's western Arctic. However, in the winter of 1926 she was frozen in the ice at Cambridge Bay, where she sank in 1930.

The ship now lies just off the shore in the bay, across the inlet from Cambridge Bay's former Hudson's Bay Company store. Nearby is the Cambridge Bay LORAN Tower built in 1947.