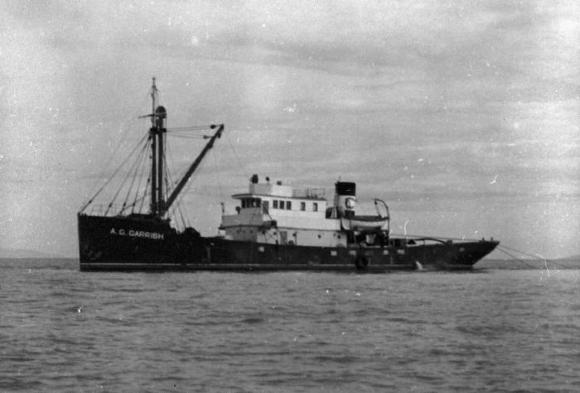 HMCS Armentières was one of twelve Battle class naval trawlers used by the Royal Canadian Navy (RCN). Named after the Battle of Armentières, she was built by Canadian Vickers, at Montreal, and was commissioned on 5 June 1918. Along with HMCS Givenchy, and HMCS Thiepval, Armentières accompanied HMCS Stadacona on a trip to the west coast via the Panama Canal in early 1919. Shortly after arriving in Esquimalt, British Columbia, Armentières was refitted to increase its utility as a training ship, with a captain's cabin built abaft the wheelhouse, and two cabins built below the upper deck. Decommissioned on 28 October 1919, the ship was recommissioned in 1923, but on 2 September 1925 sank in Pipestem Inlet, near Barkley Sound. Salvaged over a month later, Armentières was recommissioned again and resumed her service. Frequently functioning as a training ship for the Royal Canadian Naval Volunteer Reserve, Armentières also performed fisheries patrol duties, including the protection of migrating fur seals against illegal hunting. This enforcement of the North Pacific Fur Seal Convention of 1911 was often carried out in conjunction with the Battle class trawlers HMCS Thiepval and HMCS Givenchy, which at the time was serving with the Department of Marine and Fisheries as CGS Givenchy. In the 1930s, Armentières also assisted with hydrographic survey and oceanographic work.

Armentières continued her service throughout the interwar years, and by 1934 was the only Battle class trawler still serving with the RCN, although others were still in use by other government departments and would return to naval service in 1939. During much of the Second World War, Armentières served as an examination vessel at Prince Rupert, British Columbia, and following the end of the war was paid off on 8 February 1946. Subsequently sold as surplus, Armentières was purchased by the Coastal Towing Company of Vancouver, who renamed her SS A.G. Garrish, installed a new boiler, and made changes to adapt the ship for towing log rafts and scows. She underwent two further name changes by 1962, when she was known as the Laforce, and in 1972 was sold to an American buyer.